And I'm back home... Linux works and the best  I didn't broke too much stuff in Windows ( I'm as surprised about this as you ). Lets believe that in new year things go as good as this :) 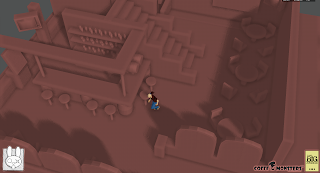 Greg
Posted by Angelus at 08:29 No comments:

Not long ago I was preparing for trip to Poland, buying Christmas presents and now we are already past this holiday and waiting for new year. Continuing my tradition I didn't done too much in this period of time. I was focusing on resting and spending time with family and friends.

This of course didn't mean that I did nothing :) Thanks to some voodoo magic Linux build once again slowly coming together on my laptop computer. I want to believe that I didn't broke too much in Windows builds doing all this changes. Well we will see when I will be back and will try compile and run game.

Other than that not too much happened. Till I will have running game on my laptop I'm blocked. Good information is im really close to finishing this :)

When I started project I seen it as simple remake. Little Big Adventure with fully 3D graphics. In next 6 years whole concept evolved into project you know right now. In this period of time some things changed:
some other not so much:
Still 6 years is really long time and all of this shouldn't take so much time. I know this too well. If I decided to do game on some existing technologies like Unity 3D, Unreal, Crytec or any other free one I would create game ages ago. But I'm stick whit this stupid idea of creating my own technology. I know that this is bad for game. I know that because of this decision I spending time developing things that in other engines I would get instantaneous. I know pain of waiting for this game and disappointment that another year passing without releasing game. I know all of this too well.

But well for me both engine and remake are equally important. In the fact one wouldn't exist without other. Everything started with dream about my own engine. I knew I want to do it but I also knew that technology without game is useless. This was begin of Little Big Adventure Remake. Time passed and I can openly tell that if not this remake I would probably long time ago just gave up on engine. But I cant.

If you look under posts and movies related to this remake you will see why. There is so many people interested into this project that I would fell terrible knowing that I never gave them even occasion to play this game so I still continue my journey of developing remake even if sometimes I'm tired or close to giving up. I'm taking then day or two break and return to topic once again. With fresh strengths and new ideas.

Sadly not all stuff going how I planned them. Recently I needed to reinstall operating system on my PC. Before I reinstalled all my programs and configured projects few days passed. In this time project didn't moved forward at all. Next few months also don't look too colorful for project. But well more about this in next posts.

Sadly because all of that I wasn't able to prepare proper video preview and I'm not sure I will be able to do it in next 2-3 months. I will for sure try my best to brings some updates. But well if I will fail I can just say sorry and try to to show you some really big when things will return back to norm :)