Once again we have month break in posting. I think this will became standard from now on :D I finally need to be reasonable and accept that I won't be able to produce more while working, coding, creating art and the most important having private life.

At this point of time whole project grown out of scale of something that is easy to handle. I'm dealing constantly with a lot of really complicated systems that depends on each other and I need to say that I handle this relatively well. But it is not like there is no hick ups. The thing that is most irritating for me personally is that it is not possible for me to do all the stuff I want :/

I'm greedy and would really like to progress all areas in the same time (concept art, modeling, level design and code). There is so much really cool things to do in all of them but reality is cruel and I can only work on one of it. When you add to that limited time you can probably imaging how I'm irritated by this whole situation :D ... thing is that I choosing to just let it go.

That is why you see so little stuff from me. I try to take it slowly this resulted in multiple things:

I gave up on milestones

This type of thing work when making game is your full time job. In my case there were always some interruptions: trips, hanging around with friends, playing other games or just laying and doing nothing to rest after tiring day. This leaving me often behind schedule which put pressure on me which I plan to avoid.

I work on project alone

Over the period of last 8 years I tried to join effort with multiple people and in the end non of this cooperation worked out. Some of this failures were my fault and some not. Thing that is important is that I put a lot of effort into whole process which resulted in loosing a lot of time. Now I take it easy and share what I have with people I know but not trying drag anybody into the project anymore.

I spending a lot of time doing all boring part of coding where I adding tests, fixing the one I broke and generally improving existing code base. Thing is that I deal with almost two thousands of files so there is a lot of stuff to do there and I need to do that so whole things roll.

Recently I got occasion to look over some stuff that I produced over the last 18 years. And I came to realization that I was always doing things in my own way. This applied to my drawings, graphics,  coding and generally my life. This is not always perfect solution because you make mistakes, sometimes you regret some of them but in the end you learning on them and improve next time.

This is kind of story with Remake that have its rises and downfalls. I'm really curious how many people just gave up on it at this point? Well in the end it is not mater because I can not do anything about them. The thing that I can do is to work on project and prove people that still believe in it that all this waiting was worth it.

Currently I going with my long term plan for project. Inside it there is no more space for moving backward because I'm already a little bit tired and if this attempt will fail I will dropping the whole project completely.... at this point I can say that this option rather move further and further away but sadly it still exist.

With this dark theme I will move to final part of this post:

What you can expect this year ?

Not to much. I don't think there will be any big announcement or release. So far next few months looks rather busy (not related to project). This will affect development rather negatively but I can not do too much about this. In my head next year should be the exciting ones for Little Big Adventures fans :] .

To not end this post with only text I will leave here this new concept of Sendel ;) 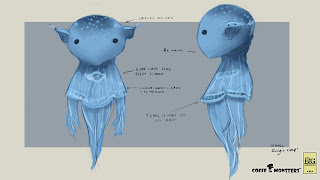