Finally arrived LBA 1 release anniversary. This year it is a pretty weird one. On one side it is a happy one because we got the announcement that a new entry to the universe will happen. On the other hand a little bit sad because our celebration stream was canceled. I initially planned to replace my stream from it with another dev update, but then life happened.

I got super busy, partially upon my own request. Specifically, I work on a presentation for the GiC conference where I will be talking about a custom resource management system. I think that this will be an interesting lecture, mostly because I will be talking about the engine that powers the L.B.A. Tribute. If any of you will be there somewhere around and see me don't hesitate to come by and say: hello.

Now after this long intro, let's focus on the project. From the last update, nothing really changed. The plan is to work on this nice small demo containing only Citadel Island. I will release it when I will be done with it (Sadly there is still no release date).

Currently, I am focusing on AI. I was not really happy with my previous solution and decided to improve upon it. A few AI-related presentations later I felt like I'm still lost. I understood what they talking about but still did not sorted stuff in my head to make a final decision regards my approach to it. This came later after few beverages (alcoholic and non) and discussions with friends. The last one probably helped here the most.

I decided to use behaviors graphs. How they work for those who don't know: when designing AI you building different states and defining conditions that need to be met to transfer between them. A simple example can be seen below. 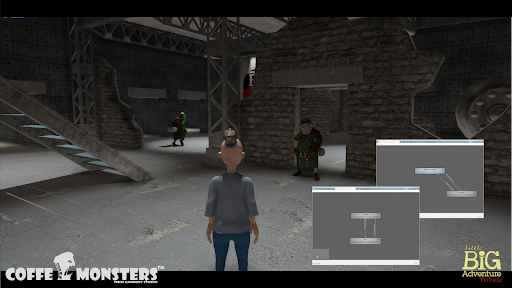 Little did I knew, how this decision will backfire on me. The next weeks were full of UI work. Not a lot of AI but mostly thinking about how to make the creation of graphs possible in the toolkit. This was important for me because I would spend a lot of time using this tool later.
Right now I think I'm done with most of this work. It took forever, lead to some interesting discoveries, performance fixes, bug fixes, UI improvements, changes in the workflows, and generally a lot of boring topics that I will spare you. What is important, now I plan to continue work on AI with the new tools I designed. How this will go we should see soon.
Posted by Coffe Monsters™ at 01:53 2 comments:

Announcement of official LBA so what now ?

For those who missed it, official work on the next LBA project has begun. This probably lead to some questions about what will happen with the project I working on?

I always knew that something like that could happen. I was working on it after hours, learned how to model, sculpt, do textures, make animations, built tools to create the whole world but in the end, never really delivered a playable game. Now that we have an official project coming I feel mixed feelings. I'm happy as a fan that there is finally this light of hope that will be one day play next installment in the series. On other hand, there is this frustration that after all that years of work I would need to drop everything without delivering anything.

Because I would like to avoid it. I will do something different. I plan to continue work on the project that will change a name from LBA Remake into LBA: Tribute to avoid any confusion that it will recreate the game. I will also stop worrying about any other islands and will just focus on recreating gameplay and story from the first one. When this will be done I will just release it so you could see the world the way I imagined it.

There is also a chance that I will be asked to completely stop working on the project. If ever come to this I will be worrying then and for now, focus on the stuff I was doing normally: adding another piece to the project which brings me closer to the day I will be able to share it with you. At the same time like probably most of you I will be waiting for more news about the official LBA project.

Email ThisBlogThis!Share to TwitterShare to FacebookShare to Pinterest
Labels: Announcement 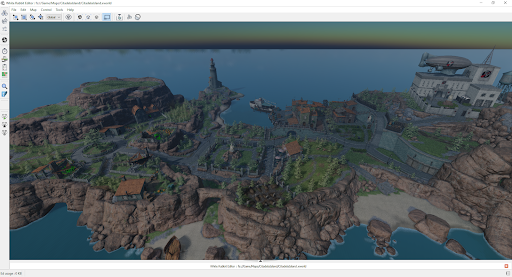 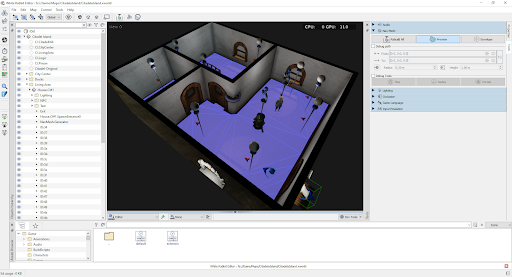 Email ThisBlogThis!Share to TwitterShare to FacebookShare to Pinterest
Labels: In between

I know I'm not too active the last two months but don't worry this is only because I was pretty busy working on all kinds of stuff: game content, graphics improvements, sounds improvements, optimizations, bug fixes, and tooling.

The first one named "LBA remake art creation" will be working on a clay sculpture of one of the LBA characters (Not a digital one but IRL). I still did not decide which, so if you have some preferences then drop them in the comments.

The second one "LBA1 remake Project update stream" will be showcasing the project. I will be showing some new locations that you have never seen before. I'm already working on this new content which I will just skip in this month's dev update.

This brings us to the last topic: April Dev Update: 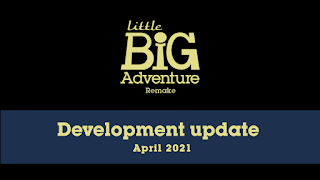 I will be streaming 28 April 2021, 6PM CET at https://www.twitch.tv/coffemonsters

Where I will try to cover changes in the project, will share some news about it, and generally will try to be entertaining for one hour. 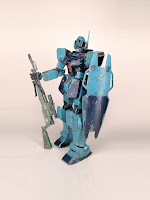 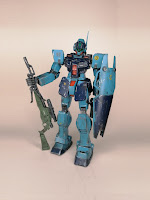 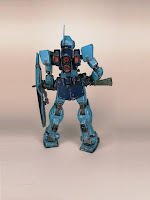 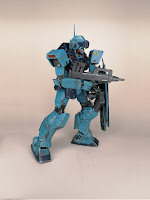 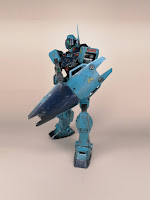 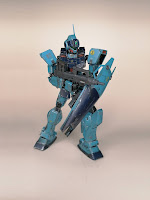 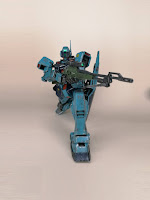 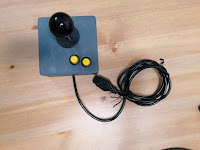 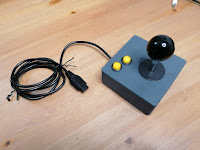 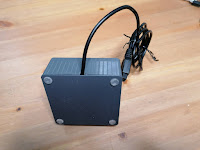 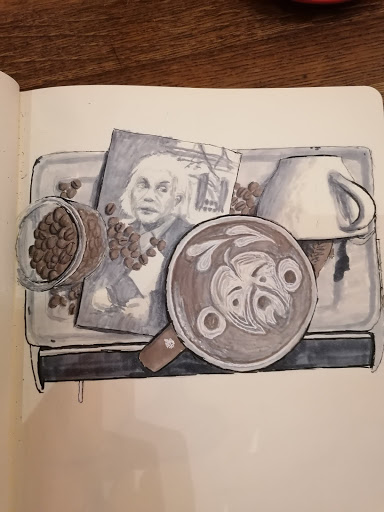 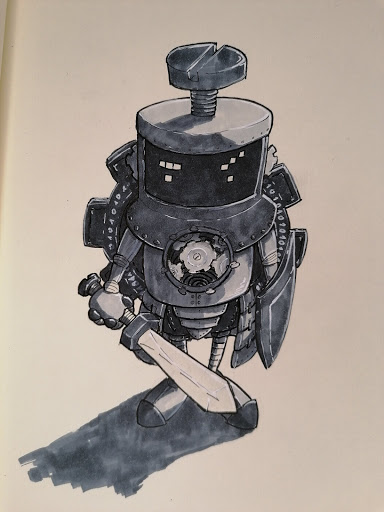 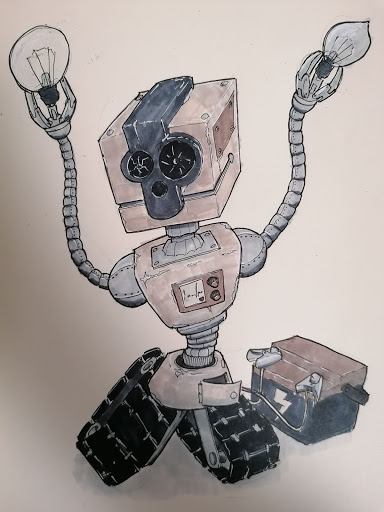 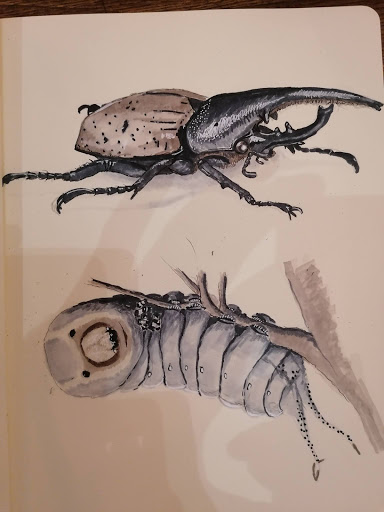 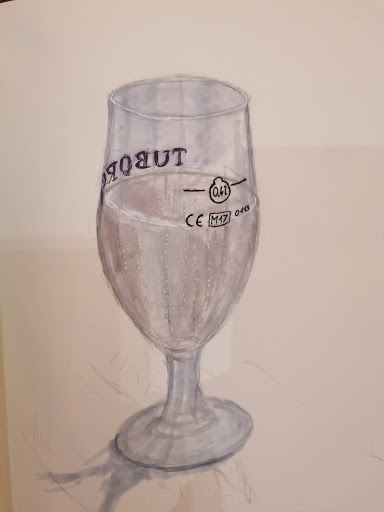 2020 ended and it would be appropriate to make a short summary of the year. For all of us, this was rather a tough one. It was full of surprises, changes to our lifestyle, and maybe saying a farewell to people that are close to us. This may create this feeling that everything was bad but I think that there were also some good things that happened.
I personally meet some lovely new people who I would normally never had occasion to meet, I got mentioned in two interviews with the original creators of the Little Big Adventure, and still continue work on the project. This may surprise but we started 11th year of this effort. I'm looking forward to it as the last one brought a lot of nice changes.

From most important ones, the remake is now a proper third-person view game. We experienced the first versions of the magic ball, improved UI, new characters, and locations. Another important change was that we have now more regular development updates (the next one is planned for 17th January 2021).
This was of course only what I served to LBA community. I personally loved a great celebration of the games anniversary organized by Phreak. The fact that we were able to listen this year to the symphonic version of music from both games. There was also the growth of at least two other LBA related projects which looks super interesting.
Because of all of that, I think that 2020 ended not so bad as it could and there were some good things in it. What is in your opinion the best Little Big Adventure related thing that happened to you in 2020?
Greg
Posted by Coffe Monsters™ at 14:54 2 comments: