April almost ended which means it is a time for another update.  This one will be a little bit different than the previous ones. There will be no video, no stream, no screenshots, and a little bit of sad news. But let us start where we ended last time ...

The game was working, I just finished adding sequences to the editor which brought some light in the tunnel. Character design was going forward and I even started talking about a new logo for a project.  Little did I know what grim fate will bring the next few weeks.

Covid-19 hit us pretty hard. Social distancing became a thing, less direct contact with people, no traveling, and working from home. This meant spending in the apartment 24/7 with a small escape for shopping. As a developer who is used to spending long hours in front of a computer, I was used to this but still a little bit annoyed. But well we have done that for a bigger cause.

Everything changed in the middle of March. That day, still half asleep I picked a phone from my sister and learned that my dad died unexpectedly. I was in a different country, with almost no way to return to my family. I found only one way back, which I took without any hesitation. The next day I was already on the way.

Skipping ahead a few weeks till now: I'm still with family and have only stuff that I took with me into this one luggage I packed. I don't have my normal work equipment and sometimes even head to work on the project.

When we get older we start to think that we see our family too often but if you count how often you have seen them last year and multiply by some large number f.ex. 50. This is the amount of goodbye that you will say to them if you are lucky. In reality, each of them can be the last one.

This is something that I heard from somebody else and now I will leave her for you.

State of the project

I didn't give up on the project but there were days when it was really hard to do anything to it. When I canceled the last stream I thought that I would be able to do April one by time flown by so fast that I just now realized that update is this weekend. I know that all of you waiting for news about the project that brings some hope that Little Big Adventure Universe will be back.

That is why I decided that you still deserved some explanation and an update about the remake.

I will split this post into 3 parts: Animations, Story and Technology

In previous update streams, I was showing a game without an animated character. This was purposely done to polish character movement. At the same time now when most of it is done it felt wrong to not bring it back.

You know me probably enough that you know there should be a twist here and of course, there is. I upgraded the animation system, found some bugs there which resulted in subtle but noticeable (when you know what to search for) artifacts.

I didn't stop there and also redo all animations that I have so far. Thanks to a new experience in animations and a few pieces of advice from a friend I was able to pull new quality. I still think that until the end of the project I will be able to do better but for now, they are good enough.

The story for a game was prepared a long time ago but a story in a game is still work in progress. Till now I focused a lot on the tech. This was to allows me to build levels, some gameplay elements, and show to the world that LBA remake is something worth waiting for.
Now, I stand in front of a big challenge: Create a game that will move people.

This is not an easy task that is why I think a lot about each decision that I make regards level design. I want the whole thing to feel like LBA but at the same time feel modern and just fun. So I play a lot into levels that I have so far, thinking about what I can do better and experimenting with different ideas.

In the background I adding a story to the whole thing in the form of moving between levels and adding placeholders for quests. Sadly while I doing this I encounter bugs and issues in technology.

Here we got to the last, standard point of my updates: technology. You know that I like to work on it and truth is that this did not change. What changed is what I do inside it. This is mostly bug fixing, workflows improvements, better error reporting, player controller, and general gameplay improvements.

For a while, there are no more cool features that I would like to improve but mostly a lot of small stuff that needs to work together so I could make a cool game. We will see how long I will be able last in this state ... a particle system would be a nice add-on to the whole engine.

I continue my quest for developing remake while you still wait for it. From good news, I just reenabled comments under Little Big Adventure Remake: 2 Years Later Video.  I marked it as for kid and just noticed that because of that YouTube blocked comments. Another good news is that this is the last canceled video update.

I will be back on 30 May with a new update for 23 year anniversary of LBA2: 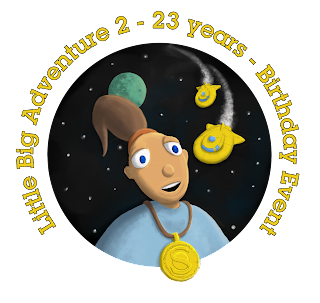 Description of the organizer:

"We're organising an LBA2 birthday event for 30th/31st of May. We did this for LBA1 in October last year and it went really well. The basic idea is multiple people streaming LBA one after the other. The current schedule is here: http://lbabirthdayevent.com/ (There's currently an issue accessing it with https). If anybody would like to stream as part of the event there's a dedicated discord: https://discord.gg/F3PMM4G - this is different from the regular LBA discord.

I will be streaming a new update at 18:00 UTC this time with some gameplay.

That is all regards the project update for this time but from interesting LBA news, Polish YouTuber arth.eu published video: Little Big Adventure 1 + 2 -- Magiczne przygody Twinsena. Underneath there were comments:

BlessedKris:Take and plus this guy, he is only guy in the world who alone make remake of LBA2 and on top of that he is Polish!!!


jfs3:It is a pity that he does not doing it in climate of LBA.

What is your look at jfs3 opinion? Do you agree, disagree with it?

And that's all for today.

To the next time.
Greg