So came this day when I release something :) Here you got link to tech demo: 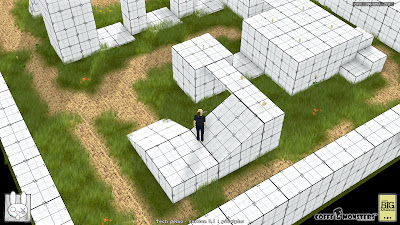 Now that this is behind I think it the best to right away summarize what went right and what not so much :)

When last weekend was starting I didn't even thought about releasing anything soon. It was just another weekend like every other. But well ... one thing to another and I ended with announcement : I will release small tech demo.
Whole idea behind Tech Demo 1 is: you get what you seen. In this small demo there is no hiding of issues that game right now have, there is also almost no hacking stuff. This past week I was mostly improving UI and preparing whole build. This of course may dissatisfy you especially after MonsieurKakis released his fully playable game but well I cannot do too much about this.
In a 1-3 month I will release Tech Demo 2. This should show you how game improving and what direction I want to take it. 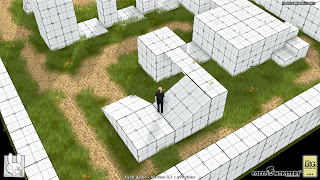 Tech demo start to look kind of interesting but in the same time I see so much problems with movement system. I really want to fix all this issues that is why I trying to wrap this whole release as quick as possible. You may expect probably daily updates.


Whole idea or releasing tech demo may of course look like easy task but from my perspective this is first release to bigger audience. I need to prepare package which take into account that not everybody have technical knowledge. This will test my whole release pipeline. I need to verify all my debug functionalities to have way to diagnose issues when somebody will have crash or problems with starting game.

There is also option menu which I always delayed because I never really need it. Now I need to make it to give you some control over game. And like always there is a lot of this small stuff that I need to do. But well in the end I giving you game the way it is right now with all good and bad stuff that are there. And I think that this should be good start.

This time something different but first I will point out culprit behind idea you will read in this post:

Now lets move to point. I will probably really regret this later but well maybe it won't be so bad. As you know 7 years passed. Game looking a lot better, technology improved a lot, we slowly moving in right direction but non of you had occasion to even try of stuff I working on.

Some people would say I could just share what I have but I don't think this is so easy as it sound. I don't want to give you game right now because of few reason:
You may agree with this or not. Of course I still want to share somehow work I doing. I had this idea of some kind of "Tech demo" which you could download and see some game mechanics. And I think we getting really close to it. I will try to wrap this:

Into playable version :) Thanks to that you will be able to see how game work and I will be able to check how engine behave on different machines. But this is not the end of story.

Because this is my starting point and I will be improving movement system I would release from time to time newer version so you could see all changes that I done :)

What do you think about this ? I really would like to hear your opinion :)